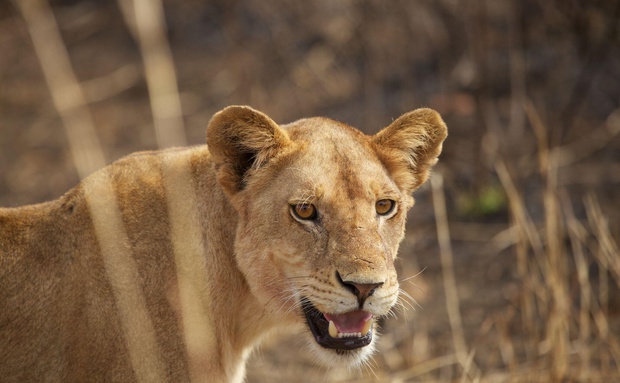 Experience two diverse National Parks and a game reserve as part of this inclusive safari itinerary. 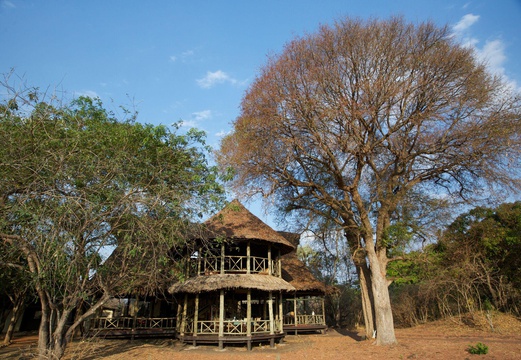 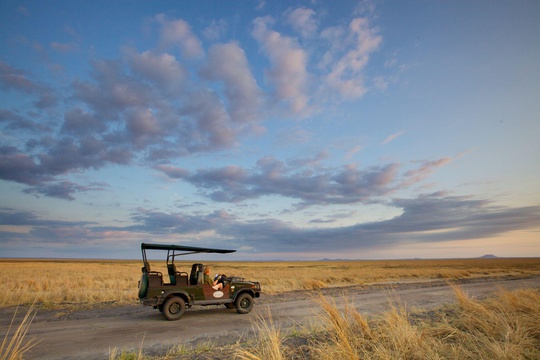 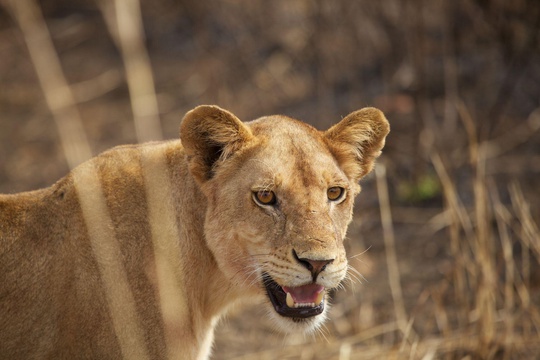 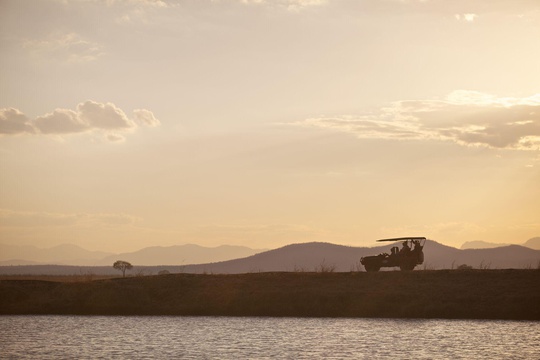 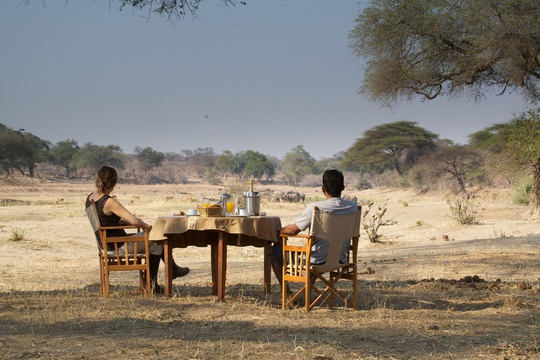 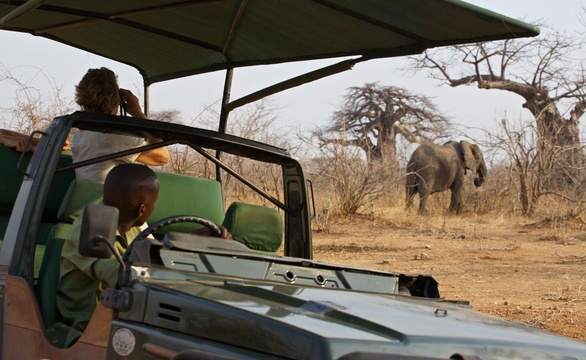 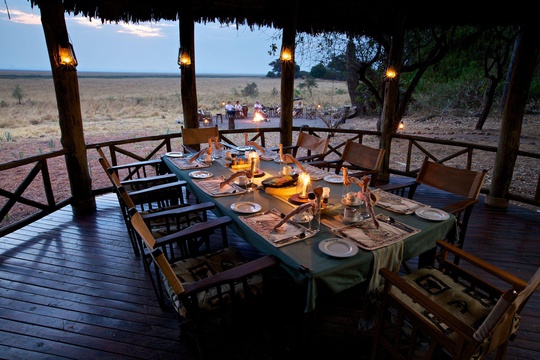 The Safari Air Link flight to Selous Game Reserve departs at 10:30 and arrives at approximately 11:15 (times may vary with schedule requirements).  The guide from Rufiji River Camp will be at the airstrip waiting to greet you and take you to check in at Rufiji River Camp.  Accommodation at Rufiji is in large furnished tents with extensive platform veranda and en suite bathroom.

This huge conservation area is a World Heritage Site and named after Frederick Courteney Selous who died in the reserve.   The area north of the sprawling Rufiji River is reserved for photographic safaris.  The river is a myriad of wide open water, lakes and channels and Selous is the only reserve that offers boating safaris in addition to the more classic vehicle and walking safaris.

Selous is estimated to have one third of all Tanzania’s African Hunting Dog.  The landscape is predominantly flat and covered with miombo trees.  Lions and leopards join the Hunting dogs as prevalent predators in the reserve and there is a good variety of prey animals from wildebeest and buffalo to smaller animals like warthog and impala.  The river supports a rich and varied bird life, the banks providing a nesting bank for the bee eaters and fishing grounds for Kingfishers.

Day 1 includes an afternoon game activity which will have been arranged prior to your arrival by the manager.  Game activities are on a shared basis, with groups of 4 or 6 in vehicles, boats and on walks.  Larger groups may be accommodated in a single vehicle up to 8.  The afternoon activity departs at 16:00 and returns at dusk in time to freshen up before drinks around the fire.

The night before the manager will have discussed the options for todays safaris, so you may have chosen an early morning walk departing camp at 0630 to return for a late breakfast at 0930 or an early bird game drive (0630-1130) or else have a bit of a lie in and go out after breakfast at 0830 until lunch.  A full day game drive option is also available departing 0830 and returning at 1600 for afternoon tea.

An early walk or game drive brings you back in time for breakfast and the departure back to the airstrip for the onward flight to Ruaha National Park.

Ruaha National Park is the largest Park in Tanzania and lies in the centre of the country.  This beautiful park has an abundance of wildlife in an array of sceneries which gives it a character all of its own.  The Great Ruaha River is the lifeline of the park as it is the only permanent water source in the park.  A full day game drive along the river takes you over rocky kopjes, home to the Greater kudu, Roan antelope and elephant, and winds down along the river bank through open plains, perfect for cheetah and lion, herds of buffalo, warthogs, jackals, bateared Foxes – the list is endless.  The river banks are rich with birdlife, hippos and crocs.  For the more adventurous, above the escarpment lives the more elusive Sable Antelope.

Ruaha is not only the largest park but can also boast a well developed road network, so there are plenty of different drives to explore for morning game drives returning the lodge for lunch.  An afternoon spent on your veranda at the water’s edge, or sitting in one of the 2 bar areas will be an equally enjoyable part of your safari here where the animals wander in front of your room to come down to drink.   An afternoon drive to the hippo pool to catch the sunset makes a perfect end to a day.

Days 5 and 6 During your time staying at Ruaha River Lodge you can choose between half day shared game drives or full day with picnic lunch enabling you to explore further afield in this enormous wilderness.  Game drives are on a shared basis with either 4 or 6/7 in a vehicle.  Private activities are available for a supplement. Accommodation at Ruaha River Lodge is along the river bank in stone and thatch ‘bandas’ with veranda and en suite bathroom.

An early start through the park gets you to the airstrip for the 0700 flight to Katavi National Park.

The 2 hour flight over miles and miles of empty bushland reminds you of the size of Tanzania and the remoteness of the Katavi National Park.  Flights only operate on Mondays and Thursdays.

Katavi National Park is a truly remote wild park with vast herds grazing the plains that characterize the park.  Shown as ‘Lakes’ on the map, these open expanses become swampy during the long rains, but dry out for 6 months of the year.  The animals are concentrated on a smaller and smaller area as the park dries out thus the large herds of buffalo, zebra, giraffe and topi to name a few.  The Katuma River shrinks into small pools which becomes home to ever more hippos, resulting in the highest concentrations of hippos found in Tanzania.  The dwindling river also exposes the caves that the crocs use to store their prey under water, watching them in these caves is a fascinating experience.

The plains are surrounded with woodland, where the predators lie in wait for the return of their prey from the grazing land.  With such abundant food sources, the lions are some of the most regal seen in Tanzania.

The accommodation tents are positioned under the shade of trees on the edge of the Kigasunga plain, close to the Katuma river.  The tents have lovely shaded verandas and are often visited by elephants passing through to feast on the fruit of the pod mahogany trees.  We have plenty of animal sightings from the camp itself as the animals come off the plain in the evening to come and drink at the river; herds of Topi, Giraffe, Zebra, Buffalo are daily visitors. Katavi also has Hunting dog, Leopard as well as many lion.  Most importantly, it does not have many other guests.

Flight departs at 10:00 back east via Ruaha to Selous, Lazy Lagoon, Zanzibar or Mafia island.